Are you egg-cited for Easter?

Easter weekend marks the end of Lent as well as the death (and subsequent resurrection) of Christ. Celebrated by people all over the world, of various Roman Catholic and Protestant denominations, its origins, as well as the etymology of the word ‘Easter’ tell a story of new life. Easter can also be linked to the Jewish celebration of Passover by much of its symbolism, as well as  its position in the calendar.  Easter customs have evolved to incorporate pagan rituals and concepts of Spring, due to the ‘rebirth’ of Christ. One such motif is the Easter Egg; seen by Christianity as a symbol of resurrection, it has taken prominence in the modern image of Easter celebrations. Often accompanying the eggs is the Easter Bunny, this character has been derived from a Germanic goddess, Ēostre, from whose name we get the English word Easter! It’s literal translation is hare, so in fact the customary Spring/Easter bunny, should in fact be a Hare. Both the Easter Bunny and Easter Eggs have undergone a process of ‘Disneyfication’, resulting in the bright colours and glittery varieties we encounter today, but the tradition of decorating eggs has been long-standing amongst Eastern Christians.

So how did Easter become all about chocolate eggs? And can overindulging this weekend lead to a week of sleeplessness?

Chocolate, traditionally, has nothing to do with Christianity or Easter. Its recorded use does span the globe and history. However, it was the Meso-Americans (the Aztecs and Mayan)s who created the drinking-chocolate which provided the basic recipe for the chocolate we find in supermarkets today. Scientists have raved about the benefits of chocolate, specifically the darker varieties,  for many years, due to its endorphin releasing properties, linked to feelings of happiness.  Endorphins are a hormone produced by the pituitary gland through exercise, excitement, pain, consumption of certain foods, love and orgasm. The effects are similar to those of opiates, killing pain and spreading a sense of well-being. Therefore it’s no surprise that since the time of the Aztecs and Mayans people have incorporated chocolate into their diets.

However, new research, according to the New York Times, suggests that the amounts of caffeine present in common branded chocolate can contain as much caffeine as a cup of brewed tea. Meaning if you consume too many ‘candy bars’ too close to bed time, you could be setting yourself up for a restless night. You may think that choosing a darker chocolate is beneficial to your health as it cuts down on sugar and fat, but chocolate with a  higher cacao percentage usually contains even more caffeine.  Other research which suggests that chocolate containing caffeine is a myth and instead a chemical called Theobromine is solely responsible for the caffeine-like effects.

Either way, overindulging in chocolatey treats this weekend could lead to elevated heart activity, a quickening of your pulse and a genuine difficulty in getting to sleep; not to mention a good old belly ache! Fret not, there are several ways you can  capture the delight (and choclatey-ness) of Easter without going overboard.

Firstly, why not try making these easy and fabulous decorated eggs. Suitable for young people as well as Easter Sunday afternoon with friends. The perfect post dinner entertainment. Plus, if you decide to blow the eggs before decorating, use them to create a delicious omelette or quiche with any lunch leftovers the next day. Eggs are a wonderful source of protein and a supposed superfood to help you sleep!!

If you’re still craving some of that chocolately goodness try the Chocolate Society’s Cocoa dusted almonds. Not only are almonds also a superfood which simulate brain development and encourage a better sleeping pattern, but the slight dusting of cocoa powder is low in fat and won’t overload your system with the chemicals which interfere with sleep. The perfect Easter gift to share, or treat to indulge. 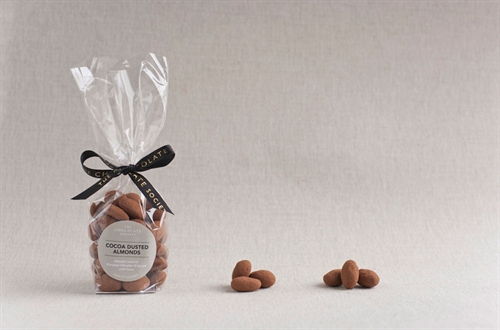