It’s no longer about “skinny”, it’s about “healthy”

At the end of last year, after much reporting by the UK press, the NHS released an article stating that half of the UK could be obese in another 20 years.

The researchers predict that if the current trend continues, up to 48% of men and 43% of women in the UK could be obese by 2030, adding an additional £1.9-2 billion per year in medical costs for obesity-related diseases.

The strangest part of this alarming statistic is that there appears to be more awareness than ever regarding healthy eating and regular exercise.  TV shows such as Supersize vs. Superskinny and most recently, Secret Eaters, are highlighting the eating habits of the UK population and attempting to rectify them. Then you have programs such as The Biggest Loser, which along with its American counterpart has succeeded in making even the largest members of humanity partake in vigorous physical exercise, with incredible results, so how is it that we’re still growing?

More often than not, it’s a case of not knowing where to start.  It’s such an overwhelming experience realising that you need to lose weight and get healthy, that one scares themselves into inactivity. What we need is motivation, assistance and credible results, we need to keep watching these TV shows, we need to talk to those who have been there and done that and most of all, we need to try.

Sometimes we just need to get personal, so here’s my story. I don’t consider my journey to be complete, in any way shape of form. In some ways, I don’t think it ever will be over because being healthy and happy is something that needs constant work. I hesitate to say ‘thin’ because it’s a word loaded with negativity, I just wanted my clothes to fit me again and for my insides to be strong and healthy.

In January 2011, I returned to London after more than 2 years in New York City. The fast food culture had taken its toll.  After an inconceivable number of pizza slices, I weighed 9 stone and none of my clothes fit me. I was now a generous size 10 and in despair, not because I no longer had anything to wear and no money to buy any pretty clothes, but more because I had allowed this to happen, again. The yo-yo effect had been the bane of my life, always.

Any time I relate this story to others, I’m always told to shush, because a large number of people believe (what I consider) my ‘fat body’ to be healthy and indeed an enviable figure. However, at less than 5 foot in height, my BMI had always been too high, I was always overweight and unhappy about it.

However, bear in mind that these calculators are essentially computers generating numbers through a formula and don’t take certain things into account. For example, I was told by a certain website that the ideal weight for my height is 7stone 4, which at that point seemed a ridiculous amount of weight to lose. I mean, where would it come from? Would I have to chop off one of my limbs in order to achieve this?

My first step was to join a dieting site. Weight Watchers was reasonably appealing, but I hated the idea of the group sessions and weigh ins. I’ve always been a lone ranger when it comes to exercise and diet, I never enjoyed going to the gym with a friend and I certainly didn’t want to enter a room of people and be weighed in front of them. So I opted for  Tesco diets, which was a cheap and reasonably easy service. It allowed me to monitor exactly what I was eating and also gave me ideas on what to eat. Struggling to find a healthy option in life just makes eating stressful, so having a meal plan laid out was perfect. I chose the GI plan with a low cholesterol option (heart disease runs in my family) and in 3 months I lost over half a stone.

However, I wasn’t feeling great, because of the low cholesterol box being ticked I was not eating healthy fats such as nuts, olive, eggs and avocados and you could start to see it in the quality of my skin, hair and my lethargy. I must add, that I was working out 5 times a week, taking back to back RPM + BodyBalance as part of the LesMills programme at my local gym and therefore just wasn’t getting the energy I needed. The combination of intense cardio with the spinning, immediately followed by the yoga-esque stretching and strength exercises was returning my flexibility and making me feel utterly fit, but my instructors commented on my tired appearance. One in particular thought I needed to re-asses my eating plan to match the amount of energy I was burning and recommended: Metabolic Jumpstart.

Now this, in its concept is fantastic and wholly achievable. It classifies foods into groups such as healthy fats, starches, fruit, veg and dairy. You have to limit/eat a certain amount of each group every day and there are little tricks such as eating a plain vanilla ice-cream as part of your dairy allowance. It matches your calorie intake to how much exercise you’re doing in a week. I’m not sure why it didn’t hold my attention for long, I think it was just the fact that after I’d received the initial bulk of information, I didn’t feel as though I needed to keep paying. I still integrate those ideas into whichever eating plan I’m following.

I continued in this manner, hovering around the 8stone mark for quite some time, maintaining weight through sensible eating and regular exercise. I understood that exercise was the key factor in my size, the moment I stopped, the weight crept up, so for me personally, staying active is the key to staying healthy. 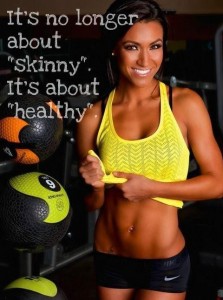 2. I read this article

I mean, look at those abs! To me this was achievable, because it meant working hard in a gym as opposed to looking at a picture of Kate Moss and thinking the only way I could be like that was to not eat- which is impossible! So I decided I wanted lean muscles and tone and if that meant not being light in weight, then that was fine.  I embarked on the 30 day shred followed by the Ripped in 30 and suddenly my weight was 7st 10 and my legs were strong and I had biceps and I felt more womanly than before.I liked that I could work out at home, so I considered cancelling my gym membership and saving money every month.

Now,  it’s Jillian Micheals that I recommend to any and everyone and if you take nothing else from this post, please go to her site and see what she has to say.

Other tools for my motivation were definitely Zaggora Hot Pants and Breathing Relief’s Nasal Dilator. Both products felt like they were helping me achieve my maximum potential, which I think is more important than feeling like you’re using a cheat.

Lastly, I discovered possibly the best website ever. Consider it your comprehensive guide to at home extreme workout plans. The perfect way to sample Jillian Micheals, P90X, Insanity and other big name regimes before investing.

Try before you buy and start seeing yourself in a whole new, healthy light.