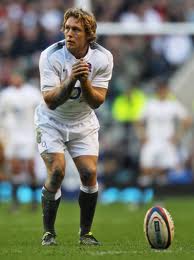 England’s greatest Fly Half, Jonny Wilkinson, has announced he is retiring. Over his career he has had many memorable games to make him one of the best players in the history of English rugby, his biggest moment was after scoring the winning drop goal in the last minute of extra time against Australia in the 2003 Rugby World Cup Final.

The 32 year old will go down in rugby history for not only being a strong kicker but all round strong player. I have picked out some of his greatest moments of his career to highlight this great role model and player. Because of a succession of injuries affecting his knee ligaments, arm, shoulder and kidney, Wilkinson’s international career was severely disrupted (but this would not stop him). He did not appear again for England after the 2003 Rugby World Cup triumph, until the opening game of the 2007 Six Nations Championship against Scotland on 3 February 2007. In his comeback international match, Wilkinson scored 27 points and was proclaimed Man of the Match.

The following week against Italy, he became the highest point-scorer in the history of the Five/Six Nations Championship.

On 6 October 2007, he also became the highest point-scorer in the history of the Rugby World Cup, kicking four penalties to overtake Scotland’s Gavin Hastings in a quarter-final against Australia

In a 2008 Six Nations Championship match against Italy, he became the first English player (and second overall) to score 1000 Test points. He is also the world record drop goal scorer in international rugby with a total of 36

In March 2008, he became the highest international point-scorer, overtaking Neil Jenkins of Wale

Injury forced him to miss out on the 2010 autumn internationals, in the process losing his position as the all-time leading points scorer in test rugby to Dan Carter. However, Wilkinson reclaimed the record during the 2011 Six Nations Championship, a tournament during which he came off the bench in each of England’s five games.

Then the unavoidable happened on December 12 2011, he announced his retirement from Test Rugby.

After 91 caps, 1,246 Test points, and one World Cup-winning drop-goal Jonny Wilkinson has retired from international rugby. Does he deserve to go down as the greatest England player of all time?