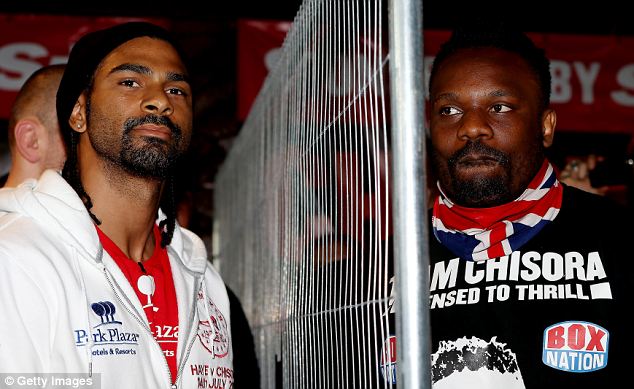 It’s fair to say that Wladimir Klitschko’s words ‘You will always be a loser’ are constant reminders lingering in Haye’s mind- ahead of the big match in a few days. It was clear to see following his epic failure in Hamburg last year – his proclaimed retirement was never going to last. On the 14 July which will see both Haye and Chisora go head to head is much about redemption for Haye than anything else.

It was only back in February this year- in a post-fight conference- that both boxers displayed their universally condemned out of the ring antics in Germany. It was a brutal public display as some may say, but arguably not the sole reason the fight is taking place this Saturday – a fight excessively embroiled in so much controversy over its legitimacy that people have lost sight it is a brilliant match. Despite rumors and headlines, fans can rest assured the contest is formally approved (despite no backing from the British Boxing Board of Control), valid, and most importantly people want it.

Haye’s reputation hangs in the balance this Saturday and needs this fight more than ever to clear his name, but is something he has denied all along. Chisora, notoriously known for his foul mouth rants and reckless conduct is equally a desperate candidate in the redemption stakes. Chisora has divided opinions in the past and has done so like no other boxer since Joe Bugner in the early seventies. It was on the 18 February that the pair grappled, and Saturdays fight was provisionally announced on the 8 May.

Chisora is no stranger to controversy, has a crazy side and his rather humorous and violent antics are impressive. He once attended a weigh in wearing nothing more than just his underpants.

Shortly following Haye’s absence from a media call early on this week-to promote the bout on Saturday- Former WBA world heavyweight champion Chisora was reported to have fuelled anger by labelling Haye as a ‘Drama queen and he’s ‘desperate, and he will never be able to get over the fact that he used a toe as an excuse for losing a world heavyweight title.” Chisora further added that he would knock Haye out in the seventh round.

Downplaying the criticism on twitter, however Haye replied “Just woke up! Apparently I slept through a media call! Hope I didn’t miss out on anything interesting coming out of Del Boy’s mouth,”.

In what was the final press conference, held at the Gilgamesh Restaurant Bar & Lounge on Wednesday in Camden, before Saturday- Haye hit back at Dereck adding ‘Dereck’s getting knocked out quick. The harder he comes the quicker he gets KO’d,’

My training has been good. I’m healthy, fit and fast,” Haye said.

Unlike Haye who has been keeping a rather subdued profile by focusing solely on his training, Chisora has been making headlines showcasing his worth in four different tournaments. One of which was a six-round victory against a roly-poly journey man. The remaining three proving to experts and casuals- who have overlooked his ability in the ring, that he is more than ‘stupid’(as referred to by Haye) and has what it takes to go all the way and claim victory on Saturday.

Chisora has lasted 36 rounds in four different title fights, and has quickly developed from an underdog to a fully-fledged heavyweight, capable of giving Vitali the toughest fight for a decade.

Haye by contrast has won a few world titles at two weights, is undoubtedly a phenomenal boxer and can be esthetically pleasing to watch. Chisora defied the odds against Vitali and has the full potential to beat Haye.

With tensions running high, millions of pounds at stake, and the prospect of the winner facing the Klitschko brothers, how could this not be the greatest fight in boxing history?

Live Coverage is available to watch from