Mickey Vann Too OLD To Handle Us- Referee Dispute Over Chisora and Haye Fight! 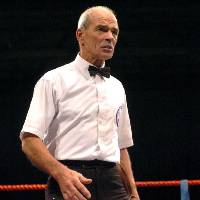 With less than two weeks to go for the 14 July bout, fresh controversy has arisen with regards to the match between David Haye and Dereck Chisora at Upton Park.Although the fight

is now likely to go ahead, amid speculation of the fight being called off last week, Haye’s trainer and manager Adam booth has objected, insisting that potential referee and former English featherweight Mickey Vann, who is in his late 60s, is not physically able to handle such a potentially-explosive heavyweight scrap, further claiming that Vann is not up to the job and that the fight requires a strong referee.

The Luxembourg Boxing Federation which initially granted the licence for the bout to take place despite the BBBC concerns- had chosen the 68 year-old veteran referee Mickey Vann to officiate the clash..In an interview with the The Sun Booth was quick to add that

“The fact that the Luxembourg Boxing Federation would nominate a 68-year-old featherweight to be in charge of a bout between two aggressive heavyweights, with a known grudge, in a fight that is certain to get physical and ugly, beggars belief.”

Vann who so far has firm backing from Frank Warren- (promoter and Boxing NationHead) is known for his no nonsense approach in the ring and has refereed a number of high profile major tournaments in the past including Lennox Lewis and Frank Bruno back in 1993.

The Haye camp- specifically-Booth who is aware of Chisora’s boisterous temper following his post match antics against champion Vitali Klitschko and his appalling history in the past (slapping Vitali, spitting at Wladimir and brawling with Haye, charged with physically assaulting his girlfriend), is feeling uneasy about the prospect of ‘Del boy’ facing Haye and going out of control in the ring.

World boxing champion Haye has always maintained his professionalism in and out of the ring adding that “I have always been a model pro in the ring, but he hasn’t,” and has demanded Zimbabwe-born Englishman Chisora take anger management classes before endorsing his future fights.

Warren who has a long standing history with Booth however, has intimated that both parties have to be ‘Happy’ before the fight goes ahead on Saturday next week. “I have every faith in Mickey but the other camp has to agree,” says the promoter. Booth on the other hand remains adamant about Mickey’s suitability for the role “Make no mistake, this fight is going to be wild. And we need to be 100 per cent confident of the third man in the ring.