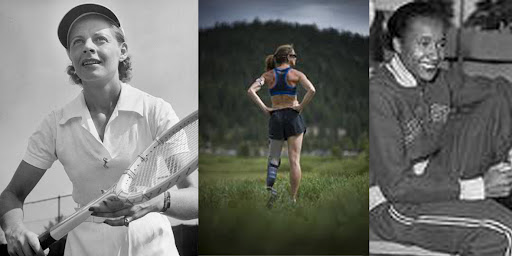 Woman’s sports are greatly underfunded and hardly supported. Women have struggled for years to have their names recognised in sports. I thought it is time to commemorate some of the great woman in the sporting world. Their stories unique and heart wrenching, these women overcame racial, sexual and unfair treatment to become some of the most inspirational woman some of us may never even have heard of.
Alice Coachman was the first black women to win a gold medal at the Olympics; Alice had to overcome both racial and sexual prejudice. Beaten by her father for participating in training, she was forced to practice in secret. Unable to afford shoes and banned from public training halls because of segregation laws, she ran barefoot on dirt roads to perfect her talent. She finally got support and got the chance to not only compete in 1948 but won a gold medal in the high-jump.
Amy Palmeiro-Winters was a runner from a very young age, Amy was lucky to be alive after a motorcycle accident. Although alive the accident had left her left leg crushed. Three years later, after twenty-five surgeries, her left leg was amputated below the knee. She wouldn’t be able to even walk for another three years.
In 2004, she decided to enter into the Silver Strand Marathon. She was equipped with a standard prosthetic leg for walking, and was five months pregnant at the time and yet this magnificent woman finished the marathon taking second in her division. Amy shows us that anything can be accomplished with strength, determination and a love for what you do.
And last but defiantly not least I come to the amazing story Alice marble. As a young girl Alice was an amazing sports player excelling in everything she tired but at the age of 15 she was raped leaving her emotionally scared. Alice managed to over come the pain of her past and used it to push her self to succeed. She won many junior tournaments as a child. Later on in her adult career she was diagnosed with tuberculoses after collapsing on the pitch. Once again tho she wouldn’t let it hold her back after 1934 she too a rest and cam back to win 18 grand slams a recorded that is still impressive today.
These woman were and are still an example of how much  woman have to offer in the sporting world and how there capabilities can be seen as never ending.