Here we are, halfway through January 2012 already. Sometimes I’m astonished at how quickly life passes and how little we take notice of it. I only became aware of how it’s lighter much later into the afternoon than it was only a month ago. Although a far cry from the unnervingly bright 10pm we have yet to come, it does mean that one can experience a crisp winter sunset at a somewhat reasonable time.

It is possible that because I’m sleeping better and therefore spend less time awake, trying to sleep, I’m less aware of the monotonous and exhausting cycle of day into night and into day again. Is that a hearty congratulations I hear you cheer? Why thank you. Yes, I am sleeping and much of it is down to following my own advice. I never consume coffee after 3pm, in fact I prefer to drink my daily allowance one cup after another (2 and a half cups max) between the hours of 8 and 11. I turned off the radiator in my room, choosing to wear warmer pyjamas and socks to bed instead, I regularly wear my Breathing Relief™ nasal dilator and I finally invested in some blinds.

For years I’ve attempted to sleep in an East facing bedroom with only sheer voile curtains, resulting in summer upon summer of fretful tossing and turning as soon as the sun rises. As 2012 dawned I thought no more and forced my father to help me with the cheap stick-on blinds I purchased when in New York 5 months ago. I’ve always been under the impression that blinds are an investment, and that installation requires precision, accuracy and a wad of cash, none of which I have. Thus, when I discovered blinds you simply trim and stick to your window I was sure I’d found the perfect product. Genius. Tacky genius. Please don’t be thinking these are a viable alternative to the classy and chic wooden blinds you see advertised on TV..no. But for someone as financially challenged and sleep deprived as me, they’ll do just fine.

I was led to believe that you couldn’t purchase anything like this in the UK, however the marvel that is amazon.com has proved me wrong. I typed “stick on blind” into google and found this. Happy shopping!

In order to illustrate just how inelegant, yet practical the product is, I’ve taken a photo of my own window with  one side clipped up and other is released so it can fall the length of the window. Just to clarify, those are plain old plastic bull dog clips, provided in the box with the blinds. I have half a mind to spray paint mine purple, so they no longer resemble something I picked up in a discount stationery shop. 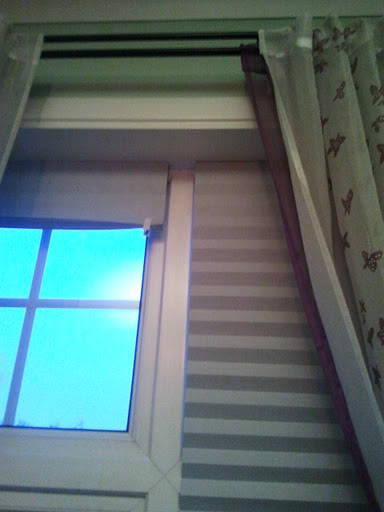 The main purpose of this week’s blog was in fact to discuss a little tradition within my group of friends. Invariably, there’s always one in any group, who sets out to do something wholly unachievable at the beginning of the year. In our circle, this ridiculousness was christened- Dry January. Some of the biggest drinkers I know were about to give up alcohol, for a whole month. I wasn’t sure it would happen, 31 days is a substantial amount of time, but remarkably, not only was the challenge completed that year, but it’s continued long enough to be granted official status as a tradition. Even the guys behind the bar at our local have come to learn of Dry January and readily hand out loyalty cards for tea and coffee to the main contenders on a night out!

Earlier this month I was watching Inside Out London (I’m not sure why, it’s utterly banal) but was pleased to see two journalists offering to give up booze for a month to monitor the effects it would have on their health. I did smile a little when the female “guinea pig” offered the following (positive) side effect to her alcohol-free lifestyle: better and more refreshing sleep. I see you nodding your heads in agreement. We all know, alcohol ruins your sleeping pattern and never allows for a refreshed feeling in the morning, but do you know how much is a truly acceptable amount for your specific weight/height?

I’m always confused by drink-driving laws in different countries. How can you measure a safe amount of alcohol across a population of varying size, weight and tolerance? Take for example someone of my stature (four feet ten inches, weighing around eight stone) and contrast that to a six foot man of fifteen stone. Surely even a single unit consumed would affect our systems to different degrees and therefore one could be keeping to the required limit yet be feeling the effects of the drink far more severely, rendering them incapable of driving safely.

In several states in the USA the limit is one drink an hour as that is how long (on average) it takes an adult to process alcohol, so theoretically as long as you keep drinking steadily, allowing your body to flush out the booze, you’re safe to drive…? These unspecific rules pose not only a threat to road users but also to the causal drinking public, for even though you’re sticking to what the ‘recommended’ amount is, it may still be too  much for you, personally.

I wanted to point you in the direction of the episode but sadly it is no longer available on BBC iplayer. However, all of the information pertaining to the program can be found on the dedicated website. Take a look, educate yourself and keep those livers smiling!